A successful launch: from the middle school robotics club to programming at CDME

Even the smallest step in the right direction may end up looking like a bigger step over time.

When Andrew Bennett, a third-year electrical and computer engineering major, joined the Robotics Club at Hastings Middle School, he didn’t anticipate one day he’d be programming a collaborative robot.

However, that’s exactly what he’s doing as an undergraduate student at Ohio State’s Center for Design and Manufacturing Excellence (CDME).

“It’s pretty cool. And this particular robot is really cool because it’s a collaborative robot, which means it’s specifically designed to work close to people,” Bennett said. “Normal robot arms when they collide with something they just keep going, they don’t have any means of detecting collision. This one does, and it will stop without imparting dangerous amounts of force.”

Bennett is developing the user interface for the system that controls the robot. The project is part of a partnership between CDME and VEGA Americas, Inc.

VEGA Americas will use the collaborative robot, or cobot, to assist with radiometric processes at their facility in Cincinnati, Ohio. The cobot will coincide with VEGA Americas’ strict safety practices, specifically when working with radioactive isotopes, by minimizing the amount of time people spend working near the isotopes.

Seeing the robot he worked tirelessly to develop in action was both gratifying and nerve-racking for Bennett.

“It’s pretty satisfying — to put all that work in and see something that does indeed work,” Bennett shared. “Although I have to say, there’s some anxiety involved. At the same time, it’s still an extremely satisfying experience for me.”

Along with the VEGA Americas project, Bennett has also played a pivotal role in a pair of other projects at CDME.

The first project was introduced by Vimal Buck, the electrical and computer senior lead engineer for student programs at CDME. With the initiative, Bennett completed production work for a professor developing specialized antennas for medical purposes. The work required him to learn how to operate a new piece of equipment.

“I spent most of my time on the PCB Mill, which is a ProtoMat S63,” Bennett said. “Essentially, it’s a precision mill designed to take a piece of fiberglass that’s copper-plated on both sides and mill it out so there are traces and pads that you can solder components to. It’s a way to prototype PCBs, or printed circuit boards, rapidly.”

Although that was primarily a solo project, Bennett had the opportunity to collaborate with CDME students and staff to create a biomedical device.

Nationwide Children’s Hospital initiated the project and tasked CDME to build a functional and reproducible device for user testing. Bennett specifically enjoyed working alongside CDME staff to create the device.

“The people here know a lot about what they do,” Bennett said. “You can’t not learn something when you’re talking to them.

“We even had a guy who was an electrical engineering contractor who came to CDME specifically to help with the project. He knew a lot about PCB design, and I had the chance to talk to him a lot. As with everyone here, he was happy to share what he knew.”

Although Bennett has undoubtedly made an impact at CDME, it’s still sometimes difficult to explain his work to those outside the field of engineering. He’s also forced to keep the details of many of his projects confidential.

The skills developed, however, are part of a growing resume Bennett will share with potential future employers.

“I’m grateful to have an opportunity like CDME on campus where you can do this kind of engineering focus. It’s my understanding that paid, practical engineering jobs like this don’t normally exist at universities. The fact that Ohio State has this is incredibly beneficial to me,” Bennett said.

“You need actual industry experience,” Bennett continued. “Almost everything I’ve done at CDME applies concepts I didn’t necessarily learn in class. College gives me the academic knowledge I need, but CDME provides a different type of skill set. When it comes time for the actual application, I have to think a little differently. For me, that’s why it’s critical to get this kind of experience before I enter the workforce.” 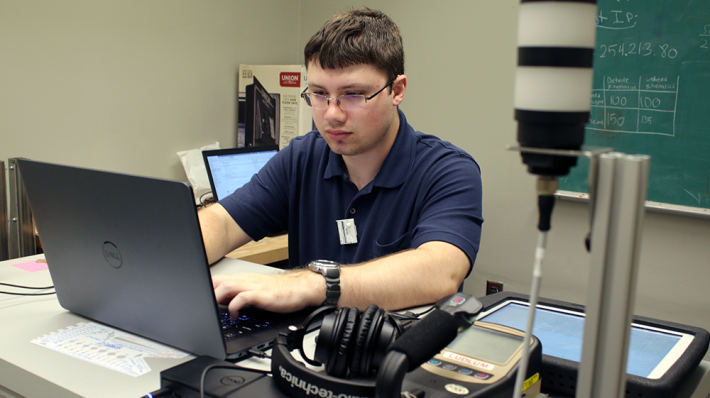 He was introduced to CDME through his involvement with the Buckeye Space Launch Initiative (BSLI). BSLI is an interdisciplinary organization with a mission to launch high powered rockets and foster the growth of students from diverse backgrounds in pursuit of reaching space.

With a keen interest in high power rocketry, Bennett initially planned to study aerospace engineering at Ohio State. However, he realized his skill set directed toward electrical and computer engineering in an applied setting.

“It occurred to me at one point — why am I taking aerospace when I should actually be studying what I spend most of my time doing, which is electronics,” Bennett said.

Through experiential learning and a thoughtful academic track, Bennett is preparing to launch a successful career.

What started as an initial step to join his middle school’s rocket club propelled his desire to work in aerospace engineering. His work with BSLI and CDME targeted his approach.

“I’m still hoping to work in the aerospace industry,” Bennett shared. “Now I know there are plenty of electrical engineering jobs in that field, especially with control systems and microcontrollers. I’d love to work on anything related to hardware that’s going to go to Mars. I think that’s going to be the next big step.”

Conner Buel bridges the gap between design and engineering at CDME