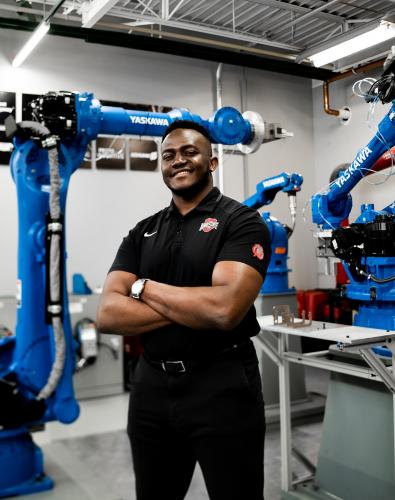 Recent graduate Emmanuel Adu sought out The Ohio State University’s Center for Design and Manufacturing Excellence (CDME) to broaden his technical skills when he was an undergraduate student. Now, armed with his CDME experience and degree in aerospace engineering from Ohio State, Adu is beginning a two-year rotational program in software engineering with Capital One.

Growing up in Nigeria, Adu was fascinated with aviation and aerospace engineering. He knew moving to the United States would allow him to fully pursue his career goals.

As a student at Ohio State, Adu recognized early-on the importance of diversifying his skill set and gaining industry experience.

“My freshman year, studying a major like aerospace engineering, I felt like it was very narrow,” Adu shared. “I wanted something where I could broaden my experiences and my skills. CDME was the perfect opportunity.”

Adu wanted a program that would introduce him to new technical skills and knowledge unbound by the constraints of his degree. CDME helped Adu fill this gap.

The project focused on experimentally and computationally testing sinusoidal cooling channels and investigating their effect on the performance of a NTP nozzle.

"The technology is promising and can provide extremely high efficiency when compared to traditional cooling techniques," said Adu.

"We sought out to make higher heat transfer possible with these new geometries and our team accomplished just that,” Adu continued. “This research offers a glimpse into the bright future of additive manufacturing.”

The project placed first in the AIAA Region III/IV Competition leading to a published technical report that Adu and his team will present at the AIAA SciTech Forum and Exposition in January 2022.

When asked about any key takeaways from his experience, Adu shared:

"To be successful in your project you need to be open to rescoping and solving the problem through an iterative process. Listening to teammates and constantly working to improve them and myself played a key role in being an effective leader."

After graduation, Adu accepted a role with Capital One as a software engineer. He also has several entrepreneurial endeavors that he looks forward to pursuing.

Conner Buel bridges the gap between design and engineering at CDME